The bark IS the bite, but ..: Why tax haven blacklists are not the answer

The OECD has been working on criteria for a tax haven blacklist. At the request of the G20 Finance Ministers, this has been a work in progress since April of this year. And the results are set to be presented at the G20 finance minister’s meeting in China next month.

This morning, the FT reports that those criteria are now set, and I turned to Twitter to evaluate the news:

So, we know @OECDtax has been working on criteria for a #taxhaven blacklist (like EU). Here they are: pic.twitter.com/0bQC9IKuTE

My immediate thoughts were aligned with comments I’ve previously made, which are clear on these types of blacklists:

Why the skepticism? Surely, tax haven blacklists are a strong and effective tool? Indeed, they are. For certain purposes.

Tax haven blacklists have been one of the key international tax policy tools to combat illegitimate and harmful tax competition throughout the past decades. Starting with the OECD ‘Harmful Tax Competition’ (HTC) project, campaigns by international organisations to ‘name and shame’ uncooperative states has been very successful. There is no doubt that the HTC project, along with similar action by the Financial Action Task Force, the G20, the EU and others, have brought about significant compliance by states around the world to international tax standards.

Jason Sharman, in his excellently titled “The bark is the bite“, explains why exactly ‘naming and shaming’ works: It creates a discourse of illegitimacy and damages the reputations of non-compliant states and those associated with them, creating key psychological and material disincentives for tax haven behaviour. Of course, we still have tax havens, so it’s not an “be all, end all” tool, but blacklists advanced the agenda of harmful international tax competition probably more than any other tool in the 1990-2010 period.

My main contentions today with tax haven blacklists and my suspicion of their effectiveness can be summed up as follows:

On the first and second points, you have to look no further than the current ‘gold standard’ for international tax haven blacklists: the OECD’s list of commitments to automatic exchange of tax information: 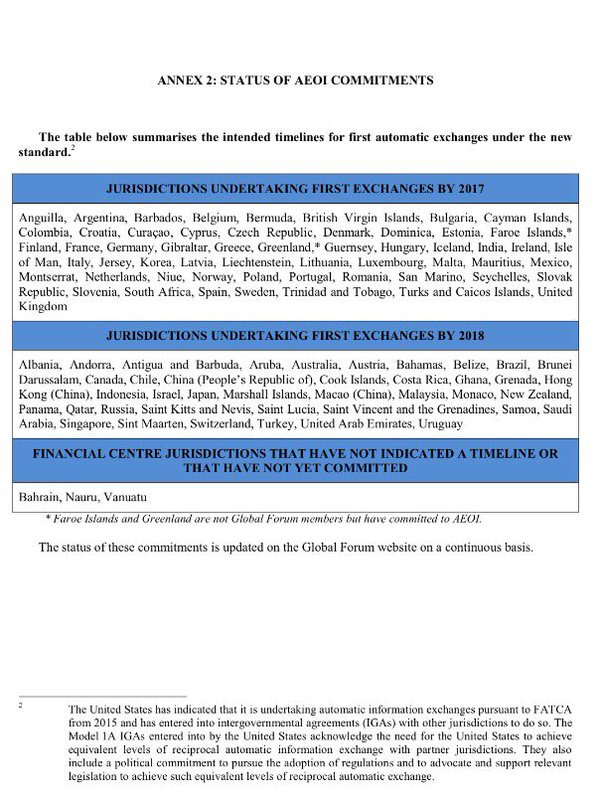 Three small island states are non-compliant: Bahrain, Nauru and Vanuatu*. Oh, and then the United States of course, but they are only mentioned in a footnote. In short, if you’re big and powerful, or if you have the right friends, you will not end up in any international tax haven blacklist; if you’re small and powerless, you risk the blacklist treatment.

That is why the United States, the UK (City of London etc.), Switzerland, Luxembourg, the Netherlands and others will not end up on the tax haven blacklists of the OECD or the EU, even though they are widely considered key tax havens.

To be fair, a completely factual reason these states do not figure on tax haven blacklists is that they comply with the established blacklist criteria (with the notable US exception, of course). But that is exactly the point – the established criteria favour certain states in their design, while disadvantaging others.

And it makes perfect sense. International organisations and their member states don’t want to upset key trading partners. International trade and diplomatic relations are simply prioritised over naming and shaming on tax. I can understand that train of thought. I think most people can, in fact. But when you are trying to nudge the world towards less ‘harmful international tax competition’, this approach causes a fundamentally ineffective solution. We may name and shame small islands states all the way to tax haven extinction, but we are not addressing the wealth of similar activity generated through larger, more powerful states.

Finally, international tax haven blacklists are not, although one might think so, based on “objective” criteria. There is no such thing. When OECD and EU staff members and their member state counterparts are constructing blacklist criteria, they are surely doing what they think is “objectively” correct, but they are also influenced by their organisational, professional and national environments. They have different purposes for and ideas about the blacklists. They are influenced by organisational pathologies.

When the EU Member States publicised national tax haven blacklists in 2015, France labelled eight countries, Portugal labelled 80, Denmark didn’t offer a list. And, by the way, only eight Member States had Panama on their list.  And whenever the OECD makes a blacklist, the criteria conveniently revolve around subscribing to OECD tax standards (on information exchange, on harmful tax practices, on administrative cooperation, on transparency minimum standards, etc. etc.). This makes sense from an OECD perspective. But as Richard Woodward and Eccleston have written, the organisational culture of the OECD (and other international organisations) and the internal focus can lead to weak, lowest common denominator standards in tax. As such, while the blacklists might make sense for the individual or the organisation, it does not necessarily provide an effective solution if the goal is to diminish harmful international tax competition.

More than anything else, the new OECD tax haven blacklist criteria will probably lead small states to expand their subscription to OECD tax governance standards. Most of them already cooperate with OECD standards, but maybe they don’t subscribe to all three requirements. Currently there are eight countries past review that are not “largely compliant” with information exchange standards. And there are three* countries uncommitted to automatic exchange of information (see above). So how much will this move? I have my doubts.

(*Endnote: As Christian Hallum pointed out to me, there are in fact no longer any jurisdictions defined as non-committed.)

3 responses to “The bark IS the bite, but ..: Why tax haven blacklists are not the answer”